Together on the streets of Hamburg for climate justice and against the colonial destruction of livelihoods! 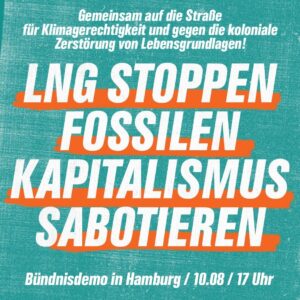 2022: The climate crisis is escalating. Floods, forest fires, food and water shortages, droughts and periods of heat exceeding 50 degrees Celcius are now a reality. In the areas that have contributed least to the climate crisis, the climate disasters are most blatant. Flooding in the Ahr Valley or burning forests in Brandenburg are the tip of the iceberg here.

Meanwhile, the energy crisis, starting with Russia’s war of aggression, is leading to completely unnecessary new fossil fuel dependencies. If the gas does not come from the pipeline, LNG terminals are now to be built by the so-called Green Party and under Robert Habeck’s responsibility. LNG, i.e. liquid gas, is to be extracted from the ground in areas inhabited by indigenous groups, among others, just so that the profit maximization of the industry does not have to be restricted here. This neocolonial and climate-damaging destruction must be stopped. We stand in solidarity with the struggles against colonial extractivism in the global south, as is currently the case in Ecuador. Activists in decolonial struggles are exposed to local repression, persecution and murder because of their struggles. Whether in Vaca Muerte or Cabo Delgado: neocolonialism kills!

While planning for LNG terminals is underway in Stade, Brunsbüttel, Wilhelmshaven, Lubmin, Rostock and Hamburg, the Port of Hamburg is cementing colonial structures like no other place in Germany. Goods, resources, commodities and fossil energy are shaped for profit, cranking up the system of exploitative capitalism ever faster. These are the direct supply chains to the climate crisis! But logistics is fragile, as not least the strikes of the dockers in Hamburg impressively showed. Let’s pick up where we left off. For us it is clear: Instead of a port for the global mobility of goods, we need open borders for all people and an economic system that is based on need instead of profit!

We stand against this system that is based on colonial structures, exploitation and profit for the rich. We demonstrate in Hamburg for the stop of all fossil energy sources and the immediate development of renewable energies! Come with us to the demonstration at the Landungsbrücken as part of the System Change Camp and the Days of Action against LNG, capitalism and colonial exploitation!